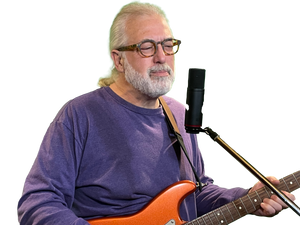 In the spirit of Van Morrison, Eric Clapton, JP Sears, Five Times August, and other brave artists with the courage to speak out, I'm writing songs protesting the current tyranny and oppression. Hi, my name is Brad Borch. I started recording songs in 2020. It was supposed to be a little "bucket list" project, just a handful of songs — but I've completed over 50 songs since then and I'm still going strong! 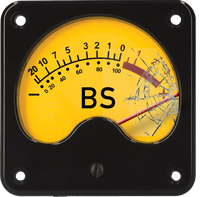 When COVID happened — and as the months of masks, lockdowns, mandates, and vaccines wore on — it became clear that it had become an excuse for corporations, governments and institutions to capitalize on fear and seize more power. That's why a lot of my songs are about freedom.

But as important as protest is, the solutions to the world's problems are limited by our imagination. I believe we can realize a world of justice and liberty for everyone. That's really what my songs are about. If we want to solve the world’s problems we going to have to do it together. I want to help us imagine a better world… one song at a time. I'm glad you stopped by. Please be sure to check out my videos. And I have 34 original T-shirt designs for sale on my SHOP page. And if you're really bored you can read my bio on my ABOUT page. 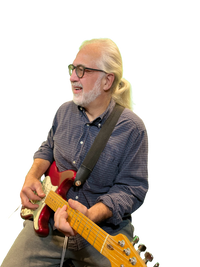 And thanks for stopping by!

This is the LONG version, there are shorter versions on my EPK page. But if you want the EP version, here goes: 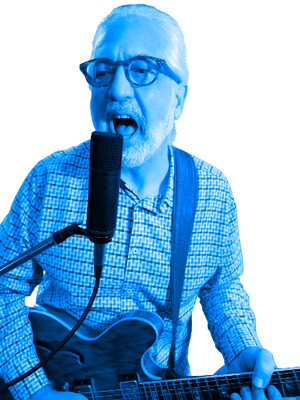 Being a preacher’s kid, I sang in enough Christmas and Easter cantatas to gag a grandma. And of course I was forced to submit to the usual regimen of piano lessons, and then there were school band and choir. One day my talented brother introduced me to the local school's music director. He took one look at me and announced that I should play the trombone (who knows why — maybe he needed trombonists, probably because I had big lips). So I played the trombone for a few years in the middle school band. But I never thought I was particularly musically gifted.

When I was fifteen my brother, who was studying at the time, gave me a music theory text, and I picked up a few concepts from that. Somewhere along the line we’d acquired a beat up Harmony acoustic guitar, a plywood beast with ancient crusty strings and about a half-inch action. But I forced myself to learn a handful of chords, and wrote a few songs, typical angsty teenage crap. It was an outlet for expression, I see that now, but there wasn’t much room for art in my blue-collar evangelical world. I still have a problem calling myself an artist. 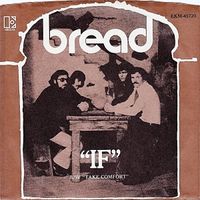 At my high school’s talent show I covered Bread's 70’s soft rock classic “If (A Picture Paints A Thousand Words).” I was nearly booed off the stage; fortunately I had enough “street cred” with some of the cool girls (probably just for the sheer guts it took to have a go at it) that they shut up the hecklers. I was able to finish the song, but it wasn’t exactly an auspicious start. 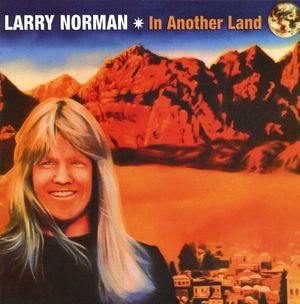 In my late teens I was buoyed by my discovery of Christian rock. Artist like Larry Norman, Randy Stonehill, Daniel Amos, Mark Heard and Phil Keaggy provided a path to feeling rebellious without actually "straying from the fold." They inspired me to write a few songs, typical evangelical dreck aimed at “reaching the lost.” I formed a band with a friend: “Forerunner,” the moniker of John the Baptist, whom the gospels refer to as Christ's “forerunner”. On our debut at our Southern Baptist church the pastor introduced as the “Four Runners.” Oh well. That pastor apparently later ran off with the church secretary. 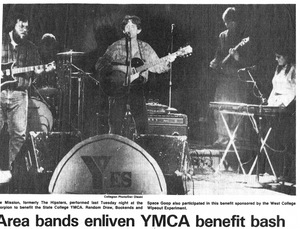 In college I played bass for “The Mission,” a band formed by two guys who had called themselves the “Hipsters” in an earlier incarnation (decades ahead of their time — that's me in the shadows). The Hipsters had covered the Grateful Dead, and people thought we sounded like them. Ironically, at the time I knew nothing about the Dead (although I had a suspicion they might possibly have been into drugs and whatnot).

But playing bass in a rock band gave me a bit of an "artsy" identity. It was the mid-eighties, the height of the New Wave era, and I could dress funky. A friend painted stars and planets on the pickguard of my Gibson “Ripper” bass, with a sign pointing to a small blue planet: “YOU ARE HERE.” We played a few big gigs, but never really went anywhere. The band broke up, I graduated and moved on. 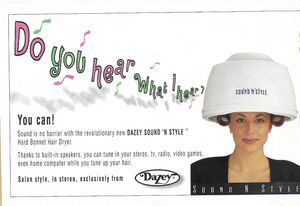 Thirty years later: get married: check; buy a house: check, raise two kids: check. Thirty years punctuated by frequent bouts of “dinking” on the guitar (often while watching TV, to the annoyance of my family), and the occasional urge to do something creative. But never actually following through, just the annual pilgrimage to an old faded notebook in the bottom of a drawer; feeling bad about never having created much. Truth be told, I never really thought I had anything particularly useful or interesting to say.

It had long been a “bucket list” project of mine to record some of my songs. In January of 2020 I had some time to devote to that project, and so, armed with some old lyrics in a faded notebook and a couple guitars, I set out to master Garageband. It was supposed to be a vanity project; have some fun and see what I was capable of.

I was thinking of finishing maybe five or six songs — and then something happened. I discovered I had a knack for writing uplifting, engaging songs; songs about life, consciousness, and faith. Inspiration struck again and again. Friends started saying they really liked the songs. So I kept writing, and that first effort exploded into a torrent of songwriting. I completed nearly 50 that year — and I realized I had something to say. 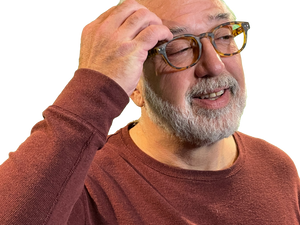 I discovered I really enjoy the process of songwriting. My songs are generally vehicles for a message, so I’m really focused on crafting interesting lyrics. I guess you could say my songs are about space — the space between my ears, the space between what I do and what I say, the space between me and the people I love, the space between “us” and “them” (hmm… I believe there’s a song there!). I’d like to think my lyrics are intelligent or sophisticated — more likely they’re just pedantic and obtuse. But I relish the creative process and I’m always psyched when a turn of phrase inspires a trail of thought, which leads to a new song.

Musically I'm a bit of a chameleon. A friend recently told me he thought one of my songs was like a cross between Bob Dylan and The Beatles. I hear a beat or melody I like and that's often the starting point for the music. And I love world music. There’s so much good and interesting music in the world, I can’t understand why anyone would choose to listen to pop all the time. I love funky bluesy stuff with a heavy beat — but I also love beautiful or melancholy songs.

When COVID happened, like everyone else I found myself swept up in the current of history. As the months of bad news, masks, lockdowns, mandates and vaccines wore on, it became clear that COVID — and the narrative around it — was little more than an excuse for corporations and governments to capitalize on fear and seize more power.

And so many of my songs are about fighting oppression. But it's no good to simply protest something, we need an alternative. I can't say what the future will look like, but whatever it is, it won't happen if we can't imagine it.

I enjoy what I'm doing, and it feels like it's what I'm here to do, so whatever my following, I intend to keep writing and recording uplifting, positive songs. I want to help us imagine a better world… one song at a time.